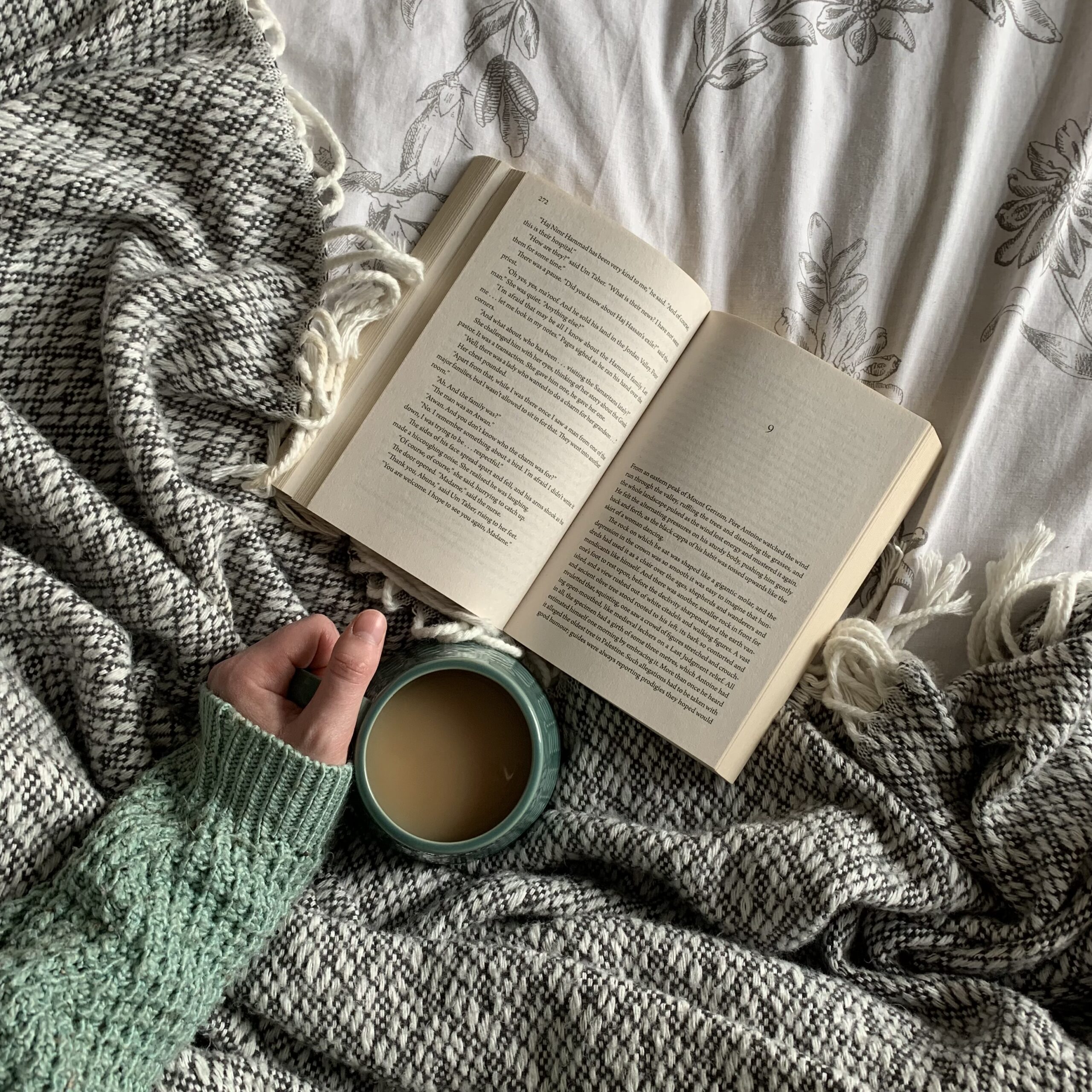 Disclosure: some of the titles within ’A Week of: Queer Memoirs, Northern Fiction, and Tackling Big Books’ were previously sent to me for free in exchange for an honest review. I’m an affiliate for Blackwell’s so this post contains affiliate links to their sites. If you buy a book via my links, I’ll earn a small commission at no extra cost to you – thank you!

This is the first week since the beginning of May that I’ve fully felt excited about reading again! Even though I read some fantastic books in May and June, I’ve been battling a lingering slump for over two months. I fully believe in letting slumps run their course, but even I was sick of watching YouTube videos when all I wanted to do was get lost in a book – but my brain wouldn’t let me.

Thankfully, this week seems to have finally banished the slump for now! Touch wood. It’s been a brilliant week of reading, including three queer memoirs, some striking fiction from the North, and a giant historical fiction tome I’ve been meaning to tackle for a while.

Last year I started posting reading journals but lost my motivation. However, since the news that IG is moving more towards video and people seemingly being locked out of their accounts for no reason, I wanted to start posting in my own, owned space again. I thought I could post reviews as well as similar book recommendations for the ones I finish that week. So I hope you enjoy, here’s what I read this week!

I’m In Seattle, Where Are You? by Mortada Gzar, tr. William Hutchins*

If you’re looking to read more queer memoirs by authors hailing from outside the US or UK, I can definitely recommend I’m in Seattle, Where Are You? It’s a bit of a challenging read in terms of structure, but once you get used to it you’ll be swept away by Gzar’s story.

During the US Occupation of Iraq, Gzar was a student at the University of Baghdad. There, he had a whirlwind romance with a Black US soldier, an affair which was a threat to both of their lives. Once Morise returns to the US, Gzar is kidnapped for his sexuality. Gzar tells this story in hindsight, having moved to Seattle in an attempt to reunite with Morise. He gets really creative with the telling of his story, often recounting horrific homophobic episodes in Iraq to inanimate objects such as a shoe or his own nose. His story is augmented by line drawings (Gzar is an illustrator as well as author) which are in turn funny and disturbing.

Even though the brutal homophobia of Iraq is behind him, Gzar faces new challenges in Trump’s America. Enjoyable afternoons at a museum are marred by racist remarks casually thrown out by security guards. He also has to confront racism in dating, with white men only interested in fetishizing his brown skin.

A difficult read that is worth persevering with to hear Gzar’s story.

Buy I’m In Seattle, Where Are You? at Blackwell’s

A Dutiful Boy by Mohsin Zaidi (audiobook narrated by the author)

The second of this week’s queer memoirs and, yes, it took me a ridiculously long time to finish! I was in such an audiobook rut for most of June. I basically listened to over half of it earlier this week. That’s not a reflection on the book itself though, which is extremely engaging, inspiring and moving. I absolutely love a memoir read by the author, and Mohsin Zaidi’s was no different.

Zaidi grew up in a Pakistani Muslim family in East London. As a closeted gay Muslim, he didn’t feel like he could fit in at home, or at school at a local comp where gang violence was rife (usually between Black boys and South Asian boys, within a system that sets both groups up to fail – Zaidi’s final day at school where they changed the last day last minute and had police outside waiting to pat them down was particularly telling of the British school system). Once at university though, he was finally able to slowly come into his own, despite still facing conflict at home.

I was very impressed with how Zaidi wove everything in, from classism, racism, homophobia, familial responsibilities and dynamics – it’s a crucial perspective that I think everyone should read! I have been trying to read more books by British people of colour, since a lot of the contemporary lit out there can feel very US-dominant, and this is a book I’d highly recommend for anyone looking to do the same.

While much of what Zaidi endured is difficult to read about, this book is also full of hope. A Dutiful Boy would be a literal beacon of hope for any young, gay, Pakistani Muslim going through the same thing Zaidi did, which is why queer memoirs are so important.

Buy A Dutiful Boy at Blackwell’s

It was pretty much guaranteed I’d enjoy Elmet and enjoy it I did! Set in Yorkshire, it follows a small, unconventional family as they push back against societal norms, gender roles, and private landlords – a very interesting mash up and one that really works! Even if I did think the ending was a little over-dramatic.

I loved the narrator of this, the youngest member of the family Daniel, who is 13-14. He lives with Daddy and his sister Cathy, a year older than him. Their father is a huge man, renowned in all of England and Ireland as the strongest bareknuckle fighter, taking home thousands in winnings when their family needs it. They live in a small copse on a piece of land they don’t own, but whose owner didn’t bother with it – until Daddy built their house there.

Honestly, I just loved the whole atmosphere of Elmet. The contrast between Daniel’s gentle narration, his careful and fastidious manner and how little he cares for traditional gender roles, and the underground world of violence, beyond the law, that they inhabit. His sister Cathy also pushes back against what’s expected of her as a 15-year-old girl. She prefers running free across the fields while Daniel is happier indoors, making their house into a home.

Fiona Mozley’s writing, especially when it comes to nature, is stunning, and I loved the inclusion of the Yorkshire lilt in the dialogue. I’m from further North but always appreciate any Northern setting and characters in books!

While it’s not one of this week’s queer memoirs, Mozley is another queer British author you want to add to your TBR.

I’m writing these blog posts on Sundays, so whatever I’m still in the middle of deserves a little mention too! Recommendations for my current reads will come in next week’s post along with their reviews.

The Parisian by Isabella Hammad

Along with Elmet, I included this one in my most recent blog post about anticipated reads I was putting off. The reason I kept putting this one off is obvious – it’s nearly 600 pages. But occasionally I like to pluck a big book off my stacks without much planning. Something about the spontaneity of it makes the task feel more achievable. Like I’m trying to catch out the big book with a sneak attack. It sounds silly but it works! It must, since I’ve read almost 300 pages of it since Saturday morning (it’s Sunday evening now).

The Parisian is incredibly rich but also very readable. I’m loving Midhat as a character and can’t wait to see where his journey takes him. I’m also loving the way Hammad explores feelings of otherness, in relation to Midhat and the people he meets in France as war roils on the horizon. We’ve just arrived back in Palestine now, so I’m excited to dive back into this rich narrative.

Check out The Parisian at Blackwell’s

Love in Colour by Bolu Babalola

I decided to restart my short-story-a-day tradition! I did this for six months back in 2018 or 2019 and it cemented my love for short story collections. If you’re hesitant about them, I recommend you try this. But make sure you pick a collection with stories that are between 10 and 25 pages each! If they’re too long, you won’t stick to it.

So far I’ve only read the first two stories but I’m in love with Love in Colour! Babalola’s writing is gorgeous. She stated in the introduction that she hopes these stories of love and romance from around the world bring the reader joy and I can confirm that after two stories, they do. Even if the second one literally made my jaw drop! She makes me care about characters in fewer than 15 pages which is no mean feat. Only reading one a day might turn out to be a struggle!

Check out Love in Colour at Blackwell’s

The third of this impromptu week of queer memoirs is Somebody’s Daughter by Ashley C. Ford! I’ve done a tonne of cleaning, meal prep and baking this weekend which means I’ve done a tonne of audiobook-ing. Across two days, I’ve listened to almost five hours of this memoir, read by Ford, and it’s super engaging, although harrowing at times. It centres around Ford’s childhood, growing up not knowing why her father is in prison, only being aware of his absence. So far, we’re getting an in-depth look into Ford’s relationship with her mother which, as you know, is one of my favourite topics. I’ll always be in awe of memoirists who are willing to put so much of themselves out there for everyone to see, and grateful for them.

Check out Somebody’s Daughter at Blackwell’s

That’s all for this week. I’ll be back next week with reviews of The Parisian, Somebody’s Daughter and whatever else I finish up in the next seven days!