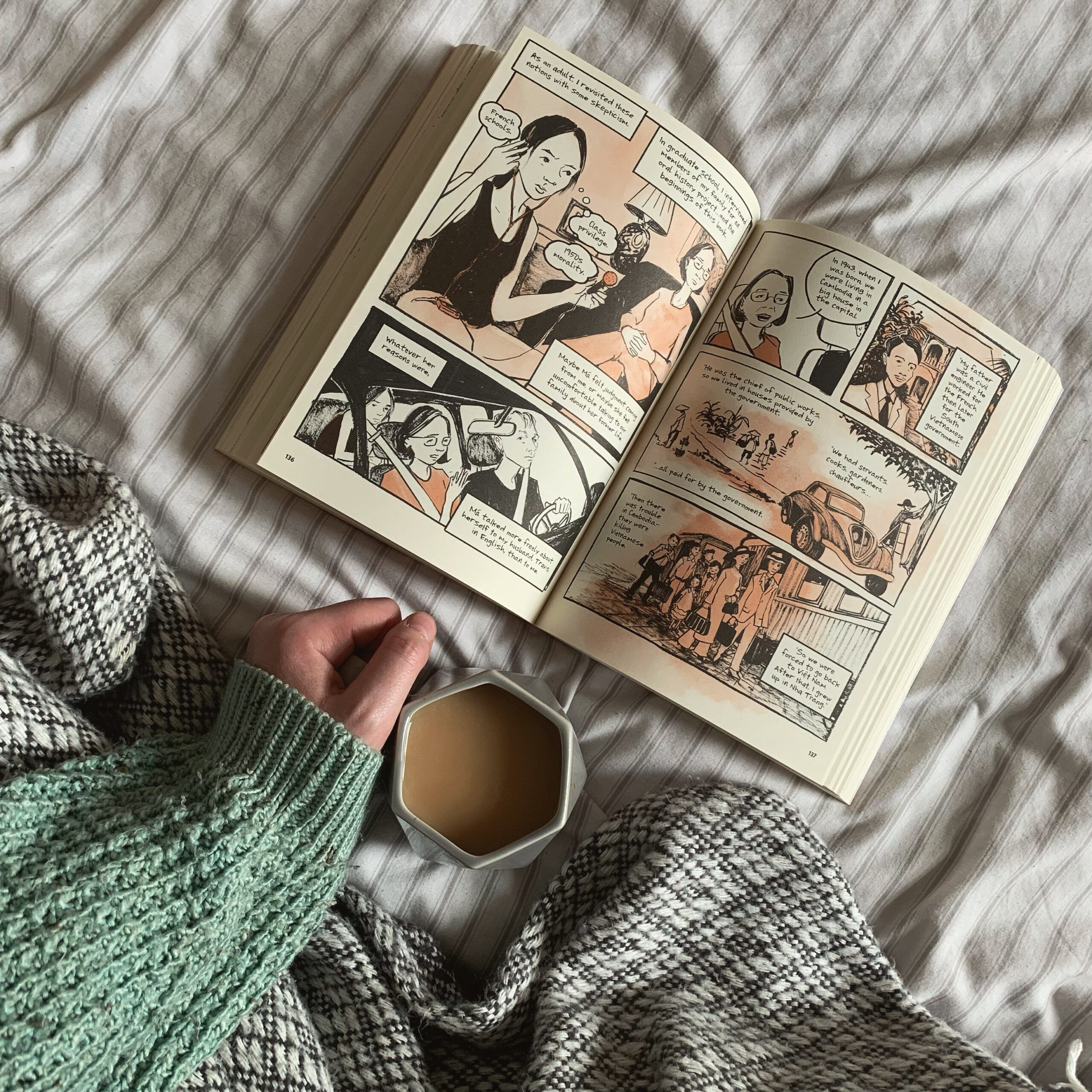 Disclosure: some of the titles within ‘A Week Of: Political Fantasy, Icelandic Fiction, and a Moving Graphic Memoir’ were previously sent to me for free in exchange for an honest review. I’m an affiliate for Blackwell’s so this post contains affiliate links to their sites. If you buy a book via my links, I’ll earn a small commission at no extra cost to you – thank you!

After finishing up one of the chunkiest books on my TBR, I moved onto some of the quicker reads from my stacks. I read a second book from an Icelandic author I’ve enjoyed previously, as well as enjoyed my second graphic memoir!

The Unbroken by C.L. Clark

The Unbroken is an epic, North African-inspired fantasy novel which provides a keen look at colonialism and empire through a fantasy lens. It’s on the slower side, as Clark has set up a very intricate world. It takes time to get into it, but it’s more than worth it if you love complex, politically-driven fantasy full of backstabbing and power plays!

It’s been praised time and time again for its representation, and I can only second that praise. Very often fantasy will be like ‘Here are lots of queer people! But they’re still oppressed for being queer… Sorry about that’. But in The Unbroken a whole spectrum of queer folk are just living. I mean yes the characters are oppressed for a myriad of other reasons (race, religion, disability), but their queerness is never questioned or used against them. There are a lot of great relationships in this book, which is a good thing since I never actually warmed up to the main romance pairing. But Clark makes up for it with plenty of other complex relationships, friendships, parental bonds etc.!

I preferred Touraine’s sections to Luca’s, but Luca’s were still interesting in their own right. I’m more interested in the magical side of fantasy than the political side (although that was my bad going in knowing it was a military political fantasy lol – I did still really enjoy it okay!!), so it makes sense I’d prefer Touraine who has more contact with the magical side of the story. I also loved how Clark slowly showed Touraine’s journey from being basically brainwashed by the empire to decolonising her mind and actions.

I’ll definitely read book two and I hope we see more of the Many-Legged in that one!

Buy The Unbroken at Blackwell’s

This is one of those books I struggle to write a review for. I liked it fine, there was nothing overtly wrong with it, but it didn’t really do much for me. I wanted something short after finishing the hefty The Unbroken and this fit the bill.

Hotel Silence, translated from the Icelandic by Brian FitzGibbon, is the story of a man all but ready to give up on life. There are content warnings for suicide/suicidal thoughts throughout this book. Jonás decides to go to some unnamed, far-flung, war-torn country to put an end to his life far from what remains of his family. While there, he gets sucked into the community as his handyman status at the ramshackle hotel he stays at brings other folks to his door for help.

It sounds bleak, but there is some warmth and humour to it, and some hope. I didn’t connect with it as much as I hoped; the prose was quite sparse, which I do often enjoy, but I felt quite emotionally detached. Jonás wasn’t particularly likeable as a young man, as we see through journal entries he rereads as an older man. I don’t need my characters to be likeable if they’re not meant to be liked, but I think we’re definitely supposed to be rooting for Jonás.

That could just be down to my frame of mind though, I wouldn’t NOT recommend it… Wow I’m really selling this. I did much prefer Miss Iceland, so if you’re looking for titles for Women in Translation Month, I’d recommend that one instead.

The Best We Could Do by Thi Bui

Ever since I read and loved Persepolis last year, I’ve been wanting to try out more graphic memoirs. I enjoyed The Best We Could Do almost as much as Persepolis, and perhaps even enjoyed the artwork more. I already wanted to read this one for a prompt for The StoryGraph’s Genre Challenge. Then it was announced as July’s The Stacks Book Club pick, so I grabbed myself a copy sooner rather than later!

This memoir begins with the author giving birth to her own child. This causes her to reflect back on her (often fraught) relationship with her own parents. From there, she tells us their story of growing up in a politically turbulent Vietnam, how they met, and the beginnings of their family. Thi Bui was born just at the end of the Vietnam War, and the family fled Vietnam in 1978, landing first in a refugee camp in Malaysia before being sponsored by family in the US.

I loved how vulnerable the author got with her audience. She admitted that her parents were not perfect parents (does such a thing even exist?), but their histories explained a lot, especially her father. He grew up amid a lot of hardship and horror, which left a terrified young boy to grow up and hide behind a stoic façade.

The author’s relationship with her mother is also complex. I liked what she says about the selfishness of being someone’s child and the difficulty of recognising your parents as people in their own right, not just your parents. She goes on to wonder whether her own experiences will invariably affect her own son in ways she can’t control or limit.

The artwork is stunning, I loved the colour palette and the broad, sweeping-ness of it. The author has a knack for depicting emotion in simple yet resonant ways.

Unfortunately I have only read one other graphic memoir that I’d recommend, so get on Persepolis if you haven’t already!

Buy The Best We Could Do at Blackwell’s

Somewhere Between Bitter and Sweet by Laekan Zea Kemp

My library loan for The Ungrateful Refugee expired without me noticing. I took this as a sign to move onto a new audiobook for now. My attention span for audiobooks has been wavering for a week, so something new was necessary to bust the audiobook slump!

Somewhere Between Bitter and Sweet did the job perfectly, as I listened to over two hours of it today! It alternates between two perspectives. We have Pen, a 18-year-old whose dreams of taking over her father’s restaurants don’t fit her parents’ expectations. Then we have Xander, a new starter at the restaurant looking for a place to settle.

Straightaway I connected with both narratives. I love that Pen knows what she wants and, despite pressure from her parents, continues to strive for her dream. We haven’t heard as much from Xander yet, but he seems super sweet, and I think his story will end up breaking my heart!

Check out Somewhere Between Bitter and Sweet at Blackwell’s

The Parasites by Daphne du Maurier

I’ve read six books from this post already and they’ve all been great! I’m hoping this trend will continue with The Parasites. Technically I’m not currently reading it yet, as I’ll be starting it once I’ve finished this blog post, but I thought I’d give it a mention anyway!

Apparently it’s quite dark and has very unlikeable characters – characters who are supposed to be unlikeable. It should be a winner!